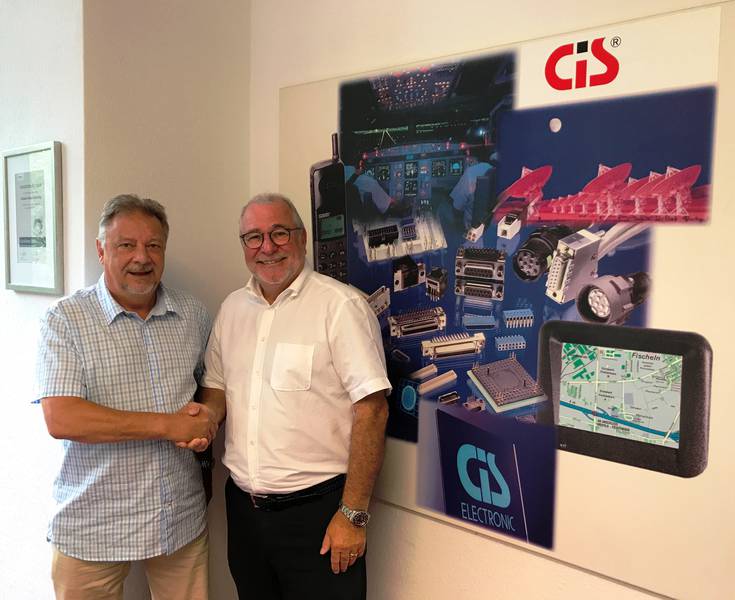 The cable assembly company, system technology and mechatronics provider CiS, with its headquarters in Krefeld, Germany, and production sites in the Czech Republic and Romania, is celebrating what can be considered an exceptional anniversary in the history of CiS!

Just a few years after the founding of CiS (Components Instruments Systems GmbH & Co. KG), Mr Lorenz was hired as Technical Operations Manager of CiS GmbH & Co. KG, which was still located in Viersen, where our joint history began.
In the course of time, Mr. Lorenz worked his way up the corporate ladder – impressing time and again with his skills – to become Head of Marketing / Sales and Authorised Signatory in 2004. In 2010, after Mr. Lorenz had already spent 33 years at CiS and the time for retirement was slowly nearing, he took over the Northern sales area as Key Account Manager during his semi-retirement. He remains an integral part of CiS electronic GmbH even today, where with his many years of experience he supports the marketing and product management department and continues to advise important customers.

“Dear Mr. Lorenz, we offer you our heartfelt thanks for your 40 years’ of commitment to CiS. Nobody else has worked for the company for so long. Forty years at CiS is an anniversary record, and only the company itself can boast a longer company history...
I am very pleased that you will continue to accompany us as you approach your well-earned retirement and pass on your wealth of experience to our young employees.
I would like to thank you personally and on behalf of the whole CiS family for your long-standing, faithful and successful life’s work. We wish you continued good health, that you keep your great sense of humour, your joy of life and, of course, continued success. We are delighted to continue our collaboration with you,” says Peter M. Wöllner, owner of the CiS Group.

As a recognised brand assembler, systems engineering and mechatronics supplier, CiS rely on sustainable concepts, quality, speed and reliability in serving their customers. Customers consider CiS to be one of the leading companies on the market. Customers particularly value the active contribution of CiS to their "total cost of ownership" and, thus, to boosting their competitiveness. CiS are aiming to systematically expand their leading position in the areas of automation, the automotive sector, banking, mechanical engineering, medical technology, controlling, instrumentation and control technology, transport, traffic and railway technology, as well as energy and environmental engineering. According to the WCA audit by the auditor Intertek in London, CiS once again in 2017 ranks among the world’s best employers.