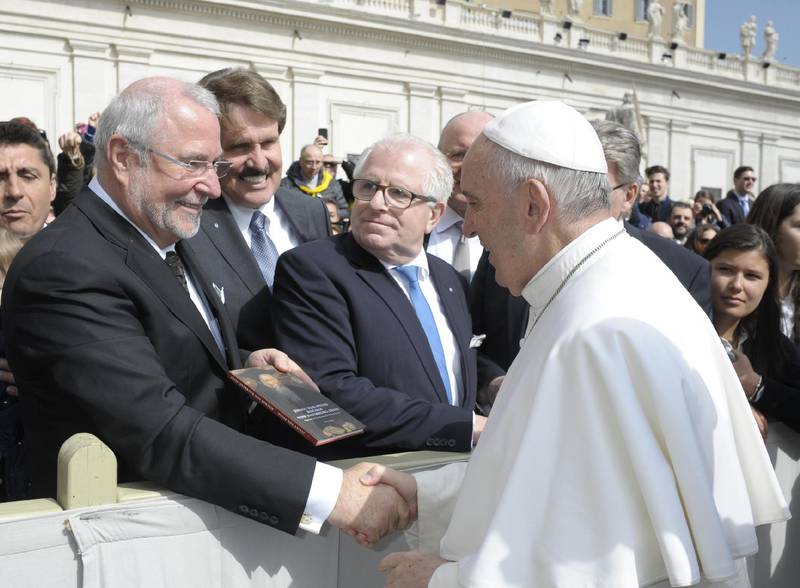 The CiS Group with registered office in Krefeld, Germany, and production sites in Czechia and Romania supports local and international social projects. On the occasion of the participation of the senate delegation during Pope Francis’ appearance on 16 March 2016 in Rome, the chairman of the executive board of the Economic Senate, Dieter Härthe, presented the Holy Father with the honorary toga from the senate. The bronze sculpture in the form of a Roman toga exclusively designed by an artist for the senate was handed over to Pope Francis as a gift and a sign of respect for his services and his work in promoting the wellbeing of mankind.

‘I was deeply moved by my meeting with Pope Francis,’ said Wöllner, who has been a member of the German Economic Senate for years and who was conferred the honorary title ‘Senator hc’ for his social commitment and his life's work on the occasion of the 40th anniversary of the Economic Senate during the previous year. CiS also promotes the senate’s newly founded relief organisation Business for the people. ‘As a member of the five-strong senate delegation headed by the managing director Dieter Härthe, it was a great honour to participate in the presentation of the senate toga and a donation for the relief organisation.’
The relief organisation, ‘Business for the people’ and several senators support the Adveniat relief project ‘El Arranque’ with a considerable donation, a project which Pope Francis co-initiated and which is very dear to him. The project is aimed at opening up better prospects for and imparting Christian values to young people in Buenos Aires.

As a highly-respected brand assembly provider, CiS focuses on sustainable concepts, quality, speed and reliability in serving its customers, who consider CiS to be one of the leading companies in the market. Customers value, in particular, the active contribution of CiS to their ‘total cost of ownership’ and, thereby, a continual boost in their competitiveness. The strategy of CiS is aimed at further expanding its leading position in the sectors of engineering, automation, automotive, medical technology, banking, instrumentation and control technology, transport, traffic and railway technology as well as energy and environmental engineering.